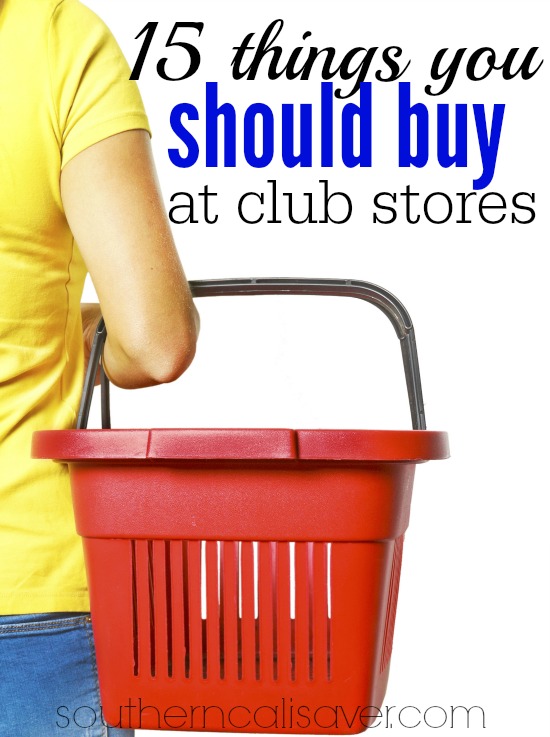 15 Items You Should Buy at Club Stores Buying Guide

Buying in bulk can be risky if you’re not careful. There are too many items that you could easily lose out on because of a higher cost or just simple waste. Club stores however, are not a bad thing. In fact, there are a few items that are almost always cheaper at Sam’s or Costco than you can get even with the typical sale.

These 15 things are almost always on that “cheaper than the grocery store” list. Make sure that you add them to your list the next time you’re hitting the warehouse floor.

Prescription Medications – Believe it or not, that diabetes medication that you take is considerably cheaper at your local club store. While you might need to up your membership level to really save (usually a cost of $20 or so), you’ll save significantly over the cost of your regular pharmacy. Flu shots and other vaccines are usually much cheaper here too.

Soda – While it’s not recommended to drink a lot of soda, buying in bulk here is much cheaper per ounce (usually) than at the store. You’ll be buying more of course, but you’ll save overall.

Booze – If you’re trying to get your party on, head to Sam’s or Costco. You can save as much as 25% on your drinks by purchasing them at a club store. Even better? In some states you don’t even need to have a membership to buy it.

Pasta – Unless you’re using a coupon and getting it free, buying your pasta in bulk is a great idea. Pasta will generally last around a year even with no preservation methods so there’s little worry about waste, plus the cost per ounce is usually pretty good compared to regular stores…as much as 20% less.

Beans – Along the same lines as pasta, if your family eats a lot of beans, head to your local club store. Beans last forever and three days even left in their regular packaging and buying in bulk can save you up to 32%.

White Rice – While it may only be around $1.00/lb at your local Walmart, head over to your local Sam’s and you’ll only pay around $0.70 per lb. Add that up over the course of your grocery shopping and you have a pretty significant savings.

Spices and Seasonings – Use garlic in almost every meal? Pick it up in bulk the next time you shop. You’ll pay less per ounce buying your spices and seasonings in large quantities than you will if you pick up a smaller bottle. A quick word of caution on this though is that spices have a shelf life that is pretty set in stone. Be sure you’re going to use it all before it goes bad before you buy them in bulk.

Gas– gas is usually cheaper at Costco and Sam’s.

Trash Bags – Personally, I think trash bags are too expensive in any store (for the most part), but picking them up in bulk can save you a bit. Buy them in bulk when you can and you’ll be able to save over picking them up in smaller boxes…for regular prices.

Gift Cards – It might surprise you, but a lot of warehouse stores sell gift cards in bulk. Basically, you buy them in large packs and save on the overall costs by picking them up like this. If you are a gift card giver, this is a perfect solution for you.

Movie Tickets – Along the same lines as gift cards, movie tickets tend to be a much better buy in bulk. If you regularly head to the movies for date nights, you’ll save big over the course of a year by buying your tickets in bulk. These ticket packs usually have long expiration dates too so that you’ll have plenty of time to use them.

Light Bulbs – Have you purchased light bulbs lately? In case you haven’t, they’re getting more and more expensive each year. By picking them up in bulk, you’ll do two things; protect yourself from paying a higher price next time and you’ll never be in the dark.

Oats or Oatmeal – Oats have a really, really long shelf life and just like beans and rice, they’re cheaper in bulk. If you bake a lot, go for the whole oats bags and if not? Opt for oatmeal.

Pet Food or treats – This is one case where buying in bulk is almost always cheaper. By picking up Fido’s food in a larger bag, you’ll pay less per ounce or pound than you would buying the smaller bags. The same can be said for treats. Where a smaller box of dog bones will run you $2-$3 at Walmart for less than 1lb box, you can pick up a 14lb box at Sam’s for around $10. Do the math on that and you’ll see that you’re scoring big savings.

Bottled Water – Bottled water in general is a waste of money, however if you must buy it, buy it at a club store. You’ll pay less per bottle and less per ounce than if you bought it at a regular grocery store sale. To save even more, pick up a reusable water bottle and skip disposables altogether.

How to Save Money on Movies for Movie Night

Updated January 3, 2020Hey! Thanks for visiting. If you like what you see here, I’d love to invite you over to the Smart Money Mom…

Couponing in California: Learn the Language

Updated January 3, 2020 I use many different acronyms here on SCS. This guide is a reference to help you understand the lingo associated with…

Updated January 20, 2020 All those hair appliances you use like your curling iron, hot hairbrush, hairdryer, etc take up a lot of room. These…